My name is Robin. I have a rare and unusual birth defect called Chiari Malformation (part of the brain stem is in the spinal column).

I had decompression surgery 23 years ago, where the medical doctors added a cadaver patch to make more space for the brain stem. In addition, I also had a rare condition where my diaphragm became paralyzed. I had major surgery to tie down the diaphragm and put my liver, gallbladder and colon back into place.

Needless to say, I have had conic pain and other physical problems since then. I tried everything that the medical profession suggested. They did not work.

One of my friends suggested that I try Bruce Winkle – Energy Healer. I talked to him and asked if he wanted to see my medical records. He said “No, he would work with my body”.

I thought, “Oh yeah, I’ve heard this before”. However, I was willing to try anything.

The first two hour session with Bruce, he was able to determine my main underlying problem was deeply held fear. (NO KIDDING! Lots of FEAR!) It extended back to my early childhood. Bruce did not know about my traumatic early life or any of the later traumas I had endured during my life. He was able to connect and release a major tragic event from my early childhood.

Bruce said “I would be a challenge and would need to see him every week, for awhile”.

I am writing this after about three months of seeing Bruce for healing sessions. He has done a remarkable job in finding and releasing various problems with the energy of my internal organs. The energy channels to the organs had been compromised and blocked by my medical and personal life. He has been able to unblock the channels to many organs and release the external pain and inflammations.

I have been amazed at Bruce’s healing abilities! I will continue to work with him until he says I am OK, or he can’t stand my whining any more.

I am so Thankful for his kind and gentle approach to my problems!

I'm excited to announce my new on-line gatherings. Please see the details under An Awakening Blessing. 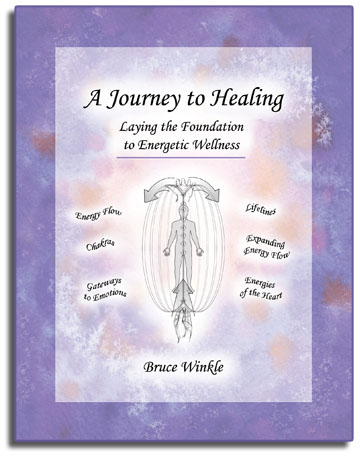 A Journey to Healing
by Bruce Winkle

Dear Bruce, I want to thank you so much for using your abilities to allow me to begin to experience a clearing of such long held blockages. I felt you would want to hear feedback about how I’m processing the results of your profound energy work. Yesterday when I woke up and got out of bed everything was affected, even my balance. That’s what I noticed first. I felt the jittery sensations around my heart, and noticed that everything felt different even the way my muscles and body moved. … END_OF_DOCUMENT_TOKEN_TO_BE_REPLACED

No words can express the deep respect and gratitude I have for the healing I have received from Bruce Winkle. After being diagnosed with ovarian cancer, I went through several surgeries and aggressive chemo therapy. I learned there was a free monthly Reiki session for cancer patients at our local hospital so I signed up. There I met Bruce, who started and coordinates this wonderful group of Reiki volunteers. Bruce worked on me at one of those Reiki sessions. I felt so much better afterward… END_OF_DOCUMENT_TOKEN_TO_BE_REPLACED

I am an energy worker trained by Barbara Brennan.  I have worked long and hard on my craft and have a bar that is very high for other energy workers.  I am very careful who I let touch my body and work on my field.  Bruce met and exceeded all of my expectations in our session.  He provided compassion, intensity, flexibility, focus, professionalism, and integrity.  I will be seeing Bruce again for my energy work in the future.  We all need an energy worker like Bruce as part of our self-car… END_OF_DOCUMENT_TOKEN_TO_BE_REPLACED

A personal Thank you for giving me the best night sleep I’ve had in months, as I suffered from insomnia. I had chronic right upper back pain, it’s gone. I feel grounded, and better able to cope with my current situations in a positive manner. You have an invaluable gift. Many blessings to you.

Bruce truly has a gift in healing with energy. He has a unique ability to sense where my energy is blocked and then help me by releasing it. I am going through some difficulties, which I am able to deal with better since I have been going to Bruce. I have personally seen a shift in myself, both physically and mentally. I noticed immediately how quickly my body aches and pains had lessoned. Also, I am more centered, happier and feel less stressed. Others have commented on this as well. I am… END_OF_DOCUMENT_TOKEN_TO_BE_REPLACED

My name is Robin. I have a rare and unusual birth defect called Chiari Malformation (part of the brain stem is in the spinal column). I had decompression surgery 23 years ago, where the medical doctors added a cadaver patch to make more space for the brain stem. In addition, I also had a rare condition where my diaphragm became paralyzed. I had major surgery to tie down the diaphragm and put my liver, gallbladder and colon back into place. Needless to say, I have had conic pain and other p… END_OF_DOCUMENT_TOKEN_TO_BE_REPLACED

I’m always looking to improve and add to my skills as a holistic practitioner. I’d heard about cellular clearing and I wanted to explore its potential as a therapeutic modality. Not only have I used these techniques for my own transformation but as a certified reflexologist, adding this protocol to my holistic arsenal only enhances the benefit my clientele experience. I can provide deeper layers of stress and emotional release because of the application of the techniques learned in … END_OF_DOCUMENT_TOKEN_TO_BE_REPLACED